Warburton will soon be one of Victoria’s premier mountain bike destinations, after Yarra 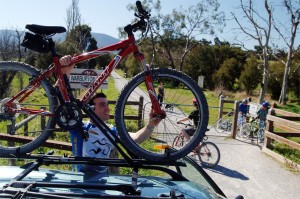 The Council worked with Parks Victoria, the Department of Primary Industries, Yarra Ranges Mountain Bikers, Warburton VALLEY CEDA and Warburton Advancement League on a project to investigate developing Warburton as a destination for mountain bikers.

The group produced a report recommending developing a world class mountain bike network. Up to 97km of new trails would be created in four separate zones linked by the Lilydale to Warburton Rail Trail and O’Shannassy Aqueduct Trail.

Construction costs could be up to $4.2m with an expected economic benefit of $23.67m.The mountain bike trail could attract 130,000 visitors a year and could provide a boost to the economic development of the region and up to 175 jobs.

The draft report  can be downloaded here.

For an insight into the warm regard cyclists have for our region, and a glimpse of the potential cycling has for our economic prosperity see this short video from Cycle Atlas or watch here.