Congrats Norm Orr – we banked on you!

Congrats to Norm Orr who was honoured in the Yarra Ranges Council Australia Day Awards last weekend. Norm has been long involved with many initiatives in our community including the Warburton Community Bank and this acknowledgement of his contribution couldn’t have gone to a more dedicated and active Upper Yarra community member. Thanks Norm and congratulations. You are a ‘leading the way’ example to all.

Mr Orr from Launching Place received the Ian De La Rue Award for Community Leadership in recognition of his contribution to the Warburton business and wider community, and Ms Hellicar from Millgrove was named Young Citizen of the Year in recognition of her extensive voluntary work.
Norm, who recently retired after 16 years as post-master at Warburton, told the Mail the award came as a great surprise.
“I’m very honoured, and especially delighted because of who the award is named in honour of,” he said.
He worked alongside the late Ian De La Rue, along with the late Don Vickers and others as part of the steering committee that establishing the Warburton Community Bank (Bendigo Bank).
He said he was a great friend and inspiration and the bank was now the life-blood of the town. 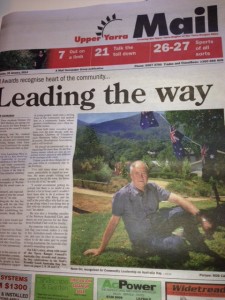