Every year, the Ian De La Rue Youth Initiative Award recognises the contribution young people make to our community.  The activities and passions of Award recipients can be varied, and all help to make our community better and stronger. Congratulations Harley! 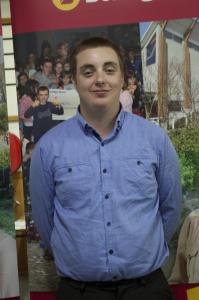 When adversity struck, Harley rose to the challenge. Re-enrolling back into school, he has grown personally and been committed to making up lost ground.  He is a role model to other young men and displays a keen interest in community. He was active in the Warburton Skatepark initiative and recently co-organised a fundraiser for War Veterans.

Harley is heavily involved in the Yarra Junction Football and Netball clubs and coaches their after-school kids football program. He is in Year 12 at the Yarra Valley Community School where he is senior Student Council Representative.

Tony says: ‘When Harley was out of action with a knee injury he volunteered instead. He never missed a night or a day and was reliability and initiative personified. He shows other youth they can do it.’