‘The Great Steps of Warburton’ begins – all invited to create in this history-making community mosaic project. 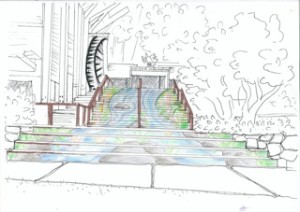 The Warburton streetscape will soon feature one of the most beautiful and enduring permanent art installations ever created in Australia.

‘The Great Steps of Warburton’ is a large-scale mosaic that will be created by an entire community in a series of workshops through April and May 2014.

Warburton, a picturesque township in the Upper Yarra Victoria, has a rich history and is noted for its natural beauty and abundant wildlife – themes that will define the mosaic design, which will ‘flow up the staircase’ at the existing ‘Waterwheel’ complex on the main street as a reflection of the Yarra River and the flora and fauna that are native to the area.

The project facilitators, and Upper Yarra locals, Sioux Dollman, Sandy Peeters and Aileen Wright have been inspired by international community mosaic projects such as the San Francisco 16th Avenue Tiled Steps project and the Puento Alto Urban Mosaic project in Chile. They have collaborated on the design and will share their artistic and technical skills as a way of ‘meaningfully engaging the community to create something that brings sparkle and magic to the town,’ says Sioux, who is highly regarded for her mosaic work, which can be seen at Melbourne Zoo and more recently at Werribee Park.

More than 300 people are expected to attend the free workshops being offered at the Warburton Community Space, where community members, school children, traders and anyone who wants to be a part of the project, can participate in creating a ‘sense of place’ and their own piece of Warburton history – and learn mosaic skills in the process.

There are 26 steps and materials to be used will include ceramic, stone, glass, mirror and slate.  Mosaic is one of the oldest art forms recorded and this project seeks to establish an Australian response that is fresh and free in style, which honours the tradition but brings a uniquely Australian perspective.

‘The vision for our town is to be known as beautiful, artful and edible. ‘The Great Steps of Warburton’ will connect vital aspects of community life – the Rail Trail, new skate park, community gardens, Visitor Information Centre and the village green,’ says co-facilitators Sandy and Aileen.

A joyful and magical official launch will be held in June.

The project has been made possible through the generous support and visionary approach of the Yarra Ranges Council and The Warburton and Yarra Junction Community Bank® branches.

‘Manmade things should be as pretty as nature.’ Sioux Dollman, March 2014

Interesting Facts About ‘The Great Steps of Warburton’