Warburton and District Anglers Club grows by more than 200% in six months!

Recreational fishing is enjoyed by more than 3.5 million Australians every year with the most popular reason for fishing being to relax and unwind. Faced with a declining and ageing membership, The Warburton Anglers Club took on the challenge of reinventing themselves and in the last six months, the club has grown from 22 members to more than 60 members!

One of the biggest areas of membership growth has been in the children’s age group. From just two teenagers last year, the club now has 20 junior members, the youngest just 8 years old. And it’s already been proven that being young makes no difference to the fish of the Yarra Valley, with the kids out-fishing the adults (of which there are 24 male and 20 female members)!

The family orientated fishing club was formed in 1987. They have monthly fishing competitions and enjoy trips away to fishing spots in the region. Karen Wilk, the club treasurer says, ‘Fishing is a great activity that people of any age or ability can enjoy. There are plenty of members who are delighted to pass on their knowledge and skills.’

So how have the anglers attracted such a flood of new members? Cindy Lever, a new club member, could see that an upgrade to the club’s branding appeal could revive interest.

The first step was to design a striking new membership brochure, and on the annual registration day the club signed 40 new members. The new brand identity is also used for advertising on Facebook and flyers. Cindy says, ‘The new graphics are contemporary and vibrant and the response has been so positive we’re now making Tshirts, caps and hoodies for the members – everyone wants them!’

We’ve sponsored the club to fund uniforms and wish them a great year ahead. Don’t forget we have Suyin Chan our Community Development Worker available to assist you with ideas to reinvigorate your club membership too.

The next Warburton and District Anglers event is at Big River on 8-10 May 2015. For more information on events and memberships, check out www.facebook.com/pages/Warburton-District-Anglers-Inc· 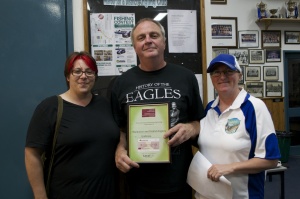